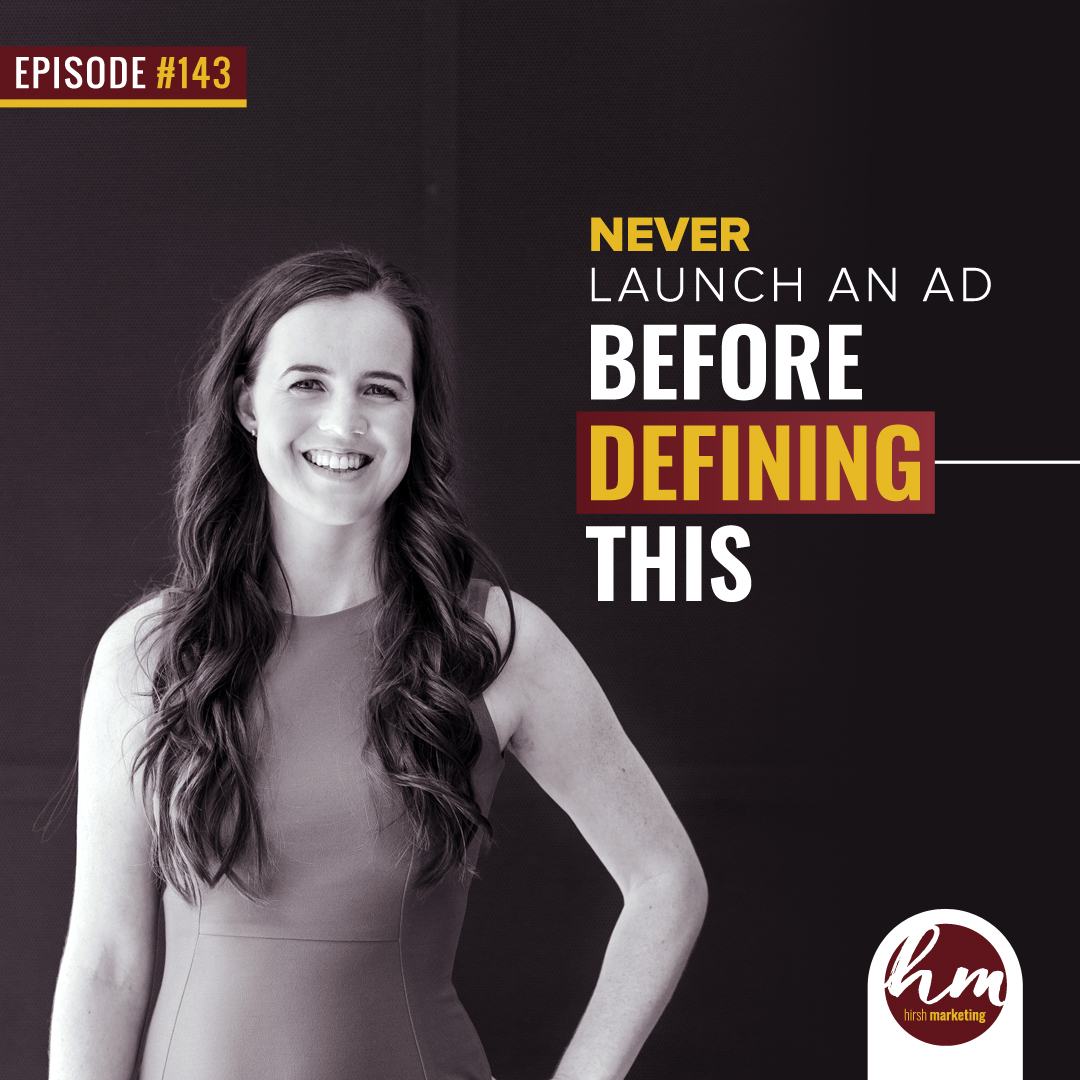 You should never launch any marketing campaign without first defining your GOAL numbers… even if you’re selling something for the first time + have zero historical data to work with!

This is vital to determining whether or not it works (and what to do differently next time).

I will say this as many times as it takes:

Never, ever skip Step 1 of The Hirsh Process, which is – define what “success” looks like with NUMBERS.

And remember, you can define success even if you’re just guessing! (You can easily adjust your goals later, when you have more data.)

If anyone tells you otherwise, send them a direct ink to this show! It’s really that important.

Because, in this episode, I’m taking you through a real-life example of how + why to set goals BEFORE you run ads, and I’m explaining…

Tune into this 10-minute “lesson in marketing,” and then hop over to Instagram (@emilyhirsh) to check out our latest marketing advice!

And if you want a team to obsess over your numbers with you, head to HelpMyStrategy.com to apply to work with us!

[1:35] “You never should have launched this campaign…”

Subscribe To & Review The Hirsh Marketing Underground Podcast
Thanks for tuning into this week’s episode of the Hirsh Marketing Underground Podcast! If this podcast has added value and helped you in your business journey, please head over to iTunes, subscribe to the show, and leave us an honest review. Your reviews and feedback will not only help us continue to deliver great, helpful content, but it will also help us reach even more amazing entrepreneurs just like you.

Hello everyone, welcome back to the podcast. Today’s episode is going to maybe be a short, very concise reminder about something that I think is extremely important for everyone to hear this. And this is something that, I don’t know exactly why it’s so difficult for a lot of people to kind of get to this place where they think this way. I sometimes have to even remind myself this, and this is coming from just a conversation. So I was helping a friend with their marketing, and they came to me and were like, “Here’s our numbers…” His marketing person [ran traffic…], and [he said,] “What do you think?” And my first response was that they shouldn’t have ever launched this campaign before defining this.

And so what do I mean, what is that? Never launch an ad, ever ever, or a campaign or a funnel to paid traffic before defining your numbers and your goals. And I would say, this is such a foundational piece that so many people are missing, I think partly because… I think this is partly why is, a lot of people don’t know, they’re like, “Let’s just see what happens,” kind of mentality. It’s like, “Well I haven’t driven traffic to this webinar before, or this funnel before, and so let’s just see what happens to it.” But here’s the problem with that, if you still do that, you have no metric to success.

So, this is a core, foundational piece to step one of The Hirsh Process, and that is knowing your numbers, and defining what success means for your business and your funnel and your marketing, before you ever turn on ads. And I think a lot of people skip over this, one, because they don’t think about it. Two, because a lot of agencies don’t do this, and people are relying on their ads team to do this for them. And three, because I think they don’t know, and I think they’re like, “Well let’s just see, and then we can go define numbers to it.” But you still can define success, even if you’re guessing, even if you’re estimating, because then at least you have something to measure against, and you can make adjustments next month, you can make changes. But, you at least have something that’s an indicator of success.

And so, this friend of mine was talking to me, and they weren’t running … so they haven’t hired us yet, because they’re proving their funnel, and so their in-house team was just, kind of, running ads, their marketing… I think it’s a “manager” is their title, who knew how to run ads. And they’re like, “Okay, well what do you think of this?” And I was like, “Well …,” They sent me their report, and I was like, “Well, first, why did you only spend X amount?” I asked that, because I was like, “What was the reason behind that?” And second, “What was the goal? I don’t know if this is good or not, because what was the goal?” And they hadn’t set a goal, because their marketing person was like, “Well, we’ve never run traffic to this webinar before, so we were just seeing how cold traffic converts.”

But that’s the wrong way to think about it, and what I want you to make sure that you never do… like if there’s one thing, it’s this. And I’ve hounded this into my team, and we always are obsessed by defining the goals, but also communicating the goals with the client so they’re on the same page, because otherwise you’ll get one person who thinks, “I think we can get 10 sales,” and then the ads team is like, “No, four is more likely based on conversion averages.” And then you’re just setting yourself up for a bad experience. And so that communication is so, so important, and we have these new tracking sheets for our clients that actually say every single week… so our team every day tracks the actual number of all the different steps of a funnel, so cost per lead and sales. And then that is compared to the monthly goal. So, now we add that into our client’s weekly and monthly summaries, very clearly, it’s like, actual result, goal, percentage to goal.

Tracking doesn’t have to be complicated. I think people get really wrapped up, too, in, “I need all these metrics, and it should sound really cool, and it should be really complicated.” But don’t just track things just to track things, it needs to tell a story. Your numbers should tell a story, and it should actually tell you what’s wrong, if you’re doing it right. And so, I’m actually going to do a podcast about letting your numbers tell a story, because that’s kind of a different offshoot I want to talk about, so that’ll be coming out soon. But what I want to really hound here is, never launch an ad before defining your numbers and your goals.

And so let’s say, in this case… let’s go through this scenario for this friend of mine who was running their ads, and the reason their marketing person told me that he didn’t set any goals was because he had never run traffic to the funnel before, and so he didn’t know what to do. But I said, “Well, what if you had just said, ‘We’re willing to spend $2,000,’ and then you worked backwards?” I said, “How many webinar registrations do you think you could have gotten for $2,000?” And right then he knew, he was like, “Well, my goal would have been $8 cost per lead, so I would have said $8 cost per lead, and that equals X amount,” not going to do that math in my head right now, “X amount of webinar registrants.”

And so I’m like, “There you go, you’ve got a budget goal, you’ve got a cost per webinar lead goal, and you’ve got a number of webinar leads that you’re trying to get in goal.” And then, they were actually trying to get an application. I said, “So, out of that, if you were to say $8 cost per lead, and you get this many webinar registrants, what does that equal for you? What does that equal in terms of applications? How many do you think you can get?” So, it’s 250 webinar registrations from paid traffic… so they were also marketing to their cold [traffic], but I wanted them to define it with their ad spend.

And I said, “So, how many do you think you can get?” He was like, “Well, I think that we could get 10% of those people that apply.” And I said, “Well, yeah, maybe. Okay, let’s go with that, so 25 applications that come from it. But let’s cut it in half, because all those people are not going to probably be live, so what if we got 10-12 applications, would you be happy with that?” 10-12 applications for a $2,000 ad spend would be incredible. I think we could even lower the goal a little bit there, and it still would be great.

But that’s what knowing your numbers also solves is, you have an amount that you’re going to spend like, the budget doesn’t become this scary thing of, “How much do we spend?” and, “I’m scared to spend that much.” It’s like, “No, it’s just numbers, I’m spending $2,000, bottom line. And I’m going to try and reach these metrics with that $2,000. And if I don’t reach those metrics, then I’m going to take action to figure out where I need to fix things.”

And so, that is why it’s so crucial to never launch a paid campaign or a paid ad without knowing your numbers. And I am just blown away by how many, ad “experts” and agencies do this without knowing the numbers. I don’t know, they rely on the client for it… For us, we set the goals, then we confirm it with the client, then we adjust them if we need to. And we’re trying to get historical data, but there are a lot of cases [where] we don’t have historical data. That is not an excuse not to know your numbers and your goals.

So, never launch a paid campaign without knowing this and defining this. It’s so, so crucial. If you have somebody running your ads or an ads team, literally go back right now, and be like, “Okay, for the next month, what is our goal?” Because it just brings so much clarity to everybody about… what they’re trying to accomplish, what they’re trying to get, and then where the holes are. It allows the numbers to tell a story, which I am going to do a separate episode about that.

Now, if you want a team to do this for you, to obsess over numbers in your own business for you, because that is one thing… everything is just numbers in marketing. If you look at it that way, everything changes, and you remove that emotion from it… as far as the results, obviously there’s emotion in the messaging in your marketing, but as far as the results and the spend and what to do and decisions to make with it, it’s numbers. And if you’re not going off of numbers, then what are you going off of?

So, if you want a team to support you with that, especially this year, my team is amazing. We’re obsessed with this. I’m obsessed with this, and therefore my team is obsessed with this. You can go to HelpMyStrategy.com to apply to work with Team Hirsh. Thanks so much for tuning in today guys, and I hope this inspires you to either go back to your ads team, go back to whoever’s running your ads, or yourself, and sit down and define a number for every step, and a goal for every step in your funnel, so you at least have something to check against, and you at least know, “Well this is success, this is what I’m getting, here’s what I need to fix.” Simplify it, guys, it’s not that hard when you look at it this way, and it’s so much more fun. I’ll see you all next time.