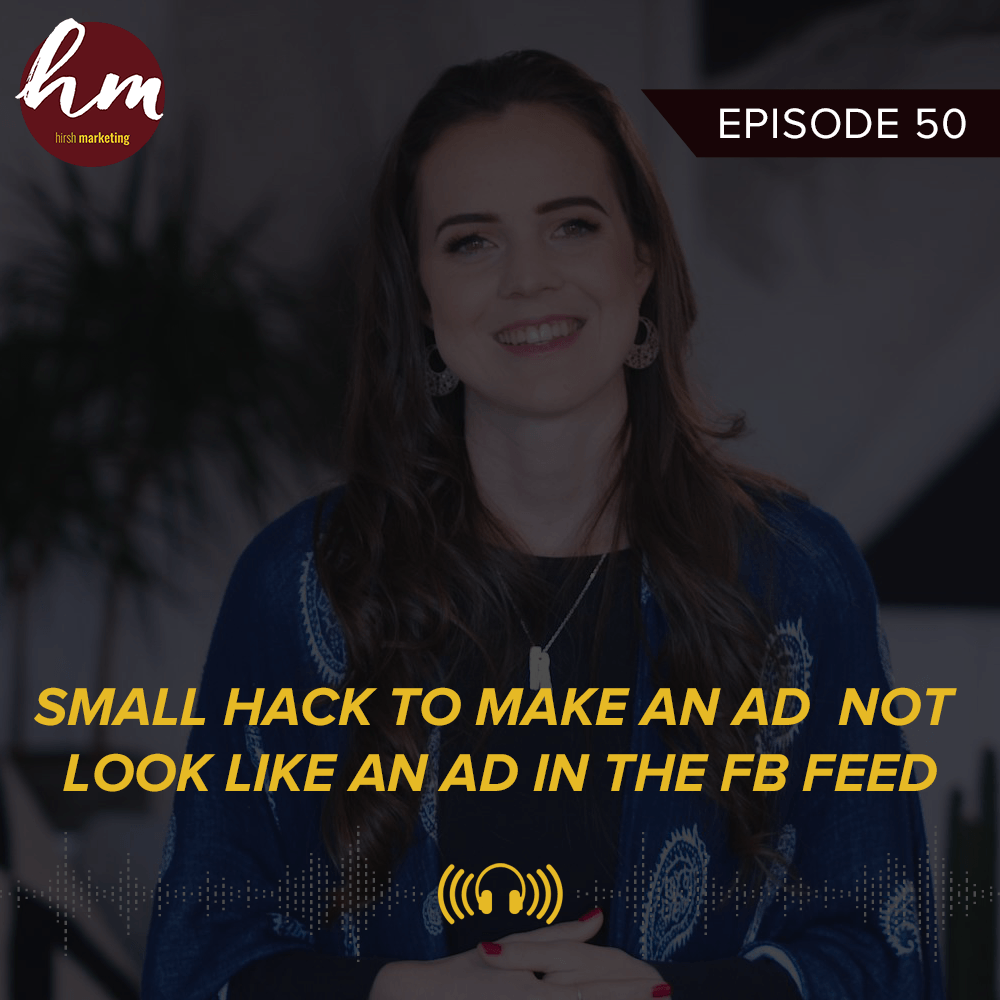 People are trained to ignore ads. (You, too, honestly.)

…Unless you utilize this Team Hirsh HACK.

Yes! In this episode, I’m detailing the simple “How To” of making your ad appear less like an ad and more like a regular post in the feed!

(And no, I’m NOT talking about simply boosting your post.)

Listen in to this short + sweet hack from Team Hirsh, and then share your takeaways on IG stories (tag @emilyhirsh for a shoutout!).

Key Points:
[1:23] The Facebook ads hack that works well, regardless of your offering
[2:17] Why does it work? Well, people will pay attention.
[5:38] The KEY to this marketing hack
[6:47] My Team is always, always, always testing creative. And here’s why.

I’m Emily Hirsh and this is The Hirsh Marketing Underground Podcast. Attention, innovators, influencers, creators, and game changing entrepreneurs, your internet domination begins right here. We are the powerhouse marketers that you’ve been looking for it. You’re already making waves in your industry and we’re here to help amplify those waves of change by creating a connection that cuts through the noise. We take everything you’ve built inside your zone of genius and find its audience. With killer strategy and laser eye for impact, we launched multimillion dollar campaigns and skyrocket your reach online.

And now we are doing the unheard of. We’re unveiling everything we’ve learned, taking you behind the scenes with the Hirsh marketing team and giving away the secrets to our clients’ success. Stay tuned for top converting strategy, ROI reports and insider knowledge that you won’t find anywhere else. You’re changing the world and we’re the team to help.

Today’s going to be a short and sweet episode and I am going to share with you guys a little hack in how to make your ads not look like an ad in the feed. And not only is this a little hack that our team’s been trying a lot recently for Facebook ads for our clients, but also it’s converting really well. So we’re doing this and … Making an ad not look like an ad so it blends into the feed typically works really well regardless of the promotion. Why? Because we’re trained as humans and people are trained to basically ignore ads. Like when you start listening to the radio and it switches to commercials, you probably tune it out, right? Same thing on TV. Same thing on Facebook. Like when we see it’s an ad and that little like even just sponsored or just that it looks like an ad, we immediately associate it as an ad.

And so if you can make something blend more and more in the feed, you’re going to have more results with it because people will pay attention to it more. They’ll trust it and they might even still realize it’s an ad after admitting because it’s not like you’re hiding the fact that it says sponsored, but they still paid attention to it. It’s still allowed them to stop the scroll and that’s what we’re trying to do here.

As you know, like when you post something on Facebook, it doesn’t have a button and a headline. You could just post on your Facebook page and have a photo and text, right? With no headline and it just looks like a post. And so we know that we can promote our posts on our page as well, right? So you could post something on your business page and then go in and promote that post or boost that post, right? But if you actually go into ads manager and pull the post ID, when you go into ads manager to pull that post, you’re able to change the objective. So here’s what I mean.

You basically go into Facebook, select your objective engagement, build the ad out, and then that gives you a post ID. Then you can take that post ID and go into Facebook and create a conversion objective ad and pull that post ID and then you’ve got a conversion objective because that’s usually what we want if we’re trying to get registrations, right? We want to have a conversion objective because if we just had engagement our ad would probably not convert very well because you’re telling Facebook like, I just want comments on my ad versus I want people to actually click and sign up for this thing. So it changes who they show the ad to based on the objective that you choose.

You take that post ID, you go in and create a conversion ad and then you’re able to have the conversion objective but have an ad and creative that has no button, no headline and it looks just like a native post in the feed. And so these have been working really well actually combined with images with no text for some of our clients. So recently we’ve been testing a lot of more like lifestyle type of photos and images with no text. And those have been working really well. Obviously we still do a lot of our designed images too. A lot of our clients have such high spend that they need both. They need designed images with headlines as well as plain images and lifestyle images if you have them are just doing so well because people relate to it.

And at the end of the day, guys, like I talk about this all the time, marketing is about connection. So how can you create an ad, a funnel, customer journey and experience that really highlights connection. And by creating an ad that looks like they’re just scrolling their feed and you posted it as a friend, they’re going to stop and pay attention to it. But the key is in the marketing hack here is that you still want it to be conversion objective, which you can’t get when you boost a post. When you boost a post. It’s just defaulting to engagement objective and that’s why we’re not really fans of just boosting posts on the feed because you don’t have that control. And so if you’re running ads to a webinar or a lead magnet or a video series or something you actually want the person to sign up for, you probably want conversion objective.

Combine that and get an ad without a headline and you might have a really winning creative. And so it’s worth it to test and it’s also worth it to expand this thought and think how else can I create content and ads and my whole funnel and the experience as a user that really just connects with them and is building a relationship with them and is building my brand and my name out there as this one that people want to pay attention to my content. And that goes down to the ads and the content that you create, the emails that you send, the landing pages that you build, the videos you make, all correlates and all should be focused on connection.

Hopefully you take this small hack and you go try it in your ads. This is something we are always, always testing as creative on Facebook. It is huge piece about conversions. It is like a huge piece of conversions and also scaling. Is like constantly, constantly testing the creative and pumping out new things for Facebook to put in front of people. And Facebook favors connection too. Like they want people to interact. Facebook does not want their users to mindlessly scroll the feed. They want their users to engage, and so they will also favor ads that do that.

Hopefully this was helpful and as always, if you want to work with team Hirsh, you want a powerhouse marketing team behind you in your marketing, go to helpmystrategy.com and apply to work with us today.

Thanks for listening to The Hirsh Marketing Underground Podcast. Go behind the scenes of multimillion dollar ad campaigns and strategies, dive deep into the Hirsh process and listened to our most popular episodes over at hirschmarketingunderground.com. If you love this episode of the podcast, do me a favor and head over to iTunes to subscribe and leave a review so we can reach more people and change more lives with this content. That’s all for now and I’ll catch you next time.