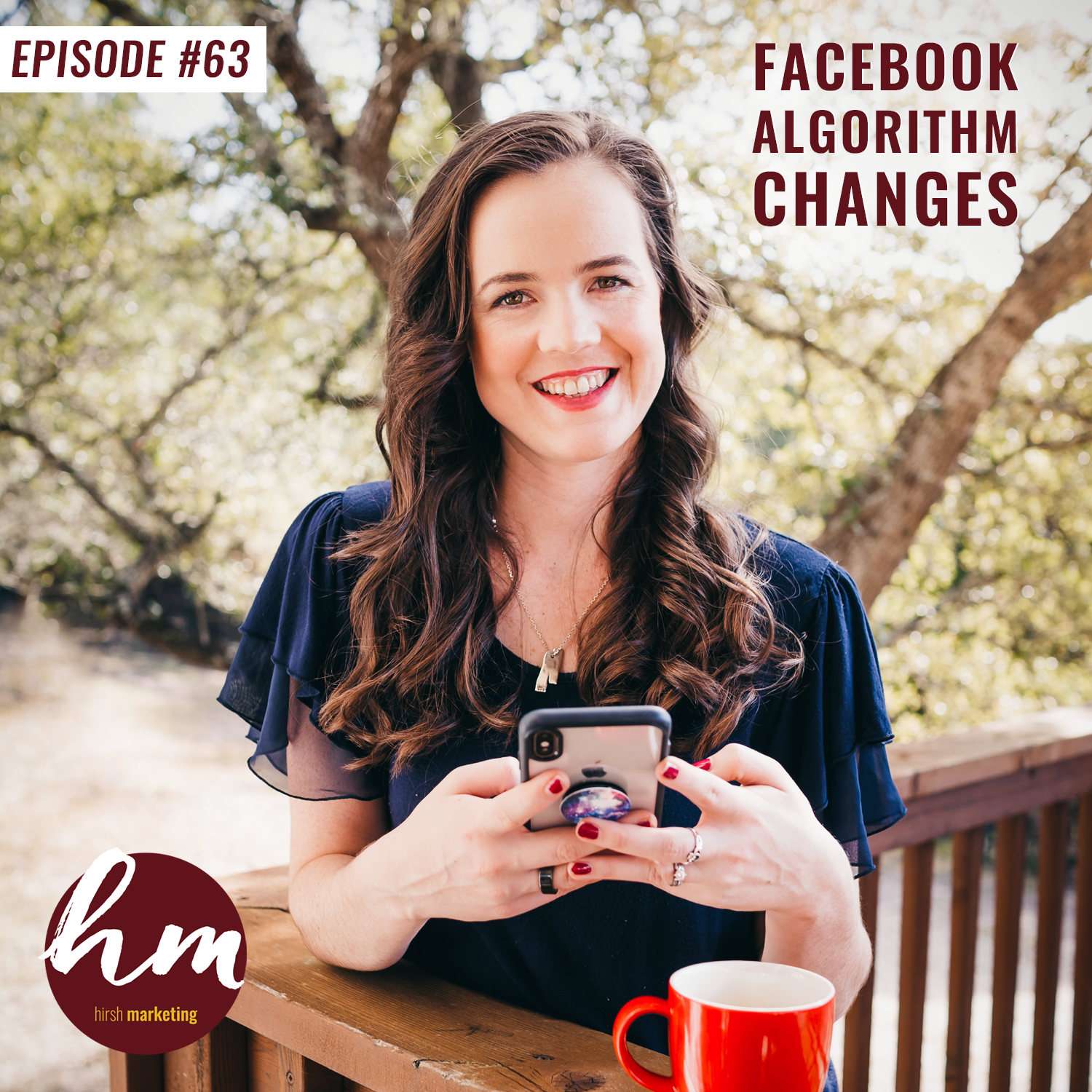 It’s hard to keep up with the Facebook algorithm changes – but that’s our job here at Team Hirsh. And today I’m talking about the major algorithm changes that have happened recently ( from late 2018-early 2019).

Tune into this episode for a brief summary of what’s working (and what’s not) with the algorithm. And then share your favorite takeaways on Instagram! Tag @emilyhirsh for a shoutout.

I’m Emily Hirsh, and this is the Hirsh Marketing Underground Podcast. Attention innovators, influencers, creators and game changing entrepreneurs. Your internet domination begins right here. We are the powerhouse marketers that you’ve been looking for. You’re already making waves in your industry, and we’re here to help amplify those waves of change by creating a connection that cuts through the noise. We take everything you’ve built inside your zone of genius and find its audience.

With killer strategy and laser eye for impact, we launch multi-million dollar campaigns and skyrocket your reach online, and now we are doing the unheard of, we’re unveiling everything we’ve learned, taking you behind the scenes with the Hirsh Marketing team, and giving away the secrets to our clients’ success. Stay tuned for top converting strategy, ROI reports, and insider knowledge that you won’t find anywhere else. You’re changing the world, and we’re the team to help.

In today’s episode I am going to talk about some of the most recent Facebook algorithm changes that really happened over the last six to 12 months, maybe more like six months, and that is that Facebook is super favoring in its algorithm content that provokes a meaningful interaction.

This rings true also for ads, and Facebook choosing to show ads more, choosing to have ads be cheaper to show people. Also, gaining some organic traction on your actual ads is possible, so they are favoring, because they want people to interact on their platform, meaningful interaction.

That means somebody commenting or liking a photo, commenting or liking basically on your ad photo or status or text or whatever it is, reacting to a post. They will show … You know, if you react to something or you like something, it actually gets the organic reach, because it might show your friend, you know, “Emily has liked this post,” so they will work that into the algorithm.

If there is comments and specifically multiple people replying to the comments on a video or post or something they read in the newsfeed, that will get a lot of traction. So if you have ads, I highly … You know, if you have ads … You probably have ads if you are listening to this podcast. With your ads I highly recommend that you have like, a customer service person respond to all the comments that you get on your ads, because it will really help the algorithm.

So we really try … We don’t do this for clients, because we wouldn’t always know what to respond, so it doesn’t make sense. But we do try on our own ads and on our own posts … Like, if I do a Facebook Live, within the same day, to respond to any comments. That will really help the algorithm, because it will show up as a lot more comments, so you will get that, you know, extra push of visibility and getting pushed out into the newsfeed.

So comments are great, which means … Which we’ll go into what all this means … Let me say the last thing, but … They actually are prioritizing something that someone shares over Messenger to start the conversation or to send to their friends.

So that’s crazy cool. Like if you had an article or a blog post or a video, and people are sharing that content over Messenger, the algorithm knows that and gives you like, a more weighted priority; but also shares in general are great.

So whatever like, interaction you can get. Comments, shares, reactions, anything to your content, it’s going to be favored a lot more in the algorithm, which means it will do better with your ads, and it will also get some organic reach, even though you’re paying for the ad.

So what does like, all this mean, and what are we taking away from the changes that we see are absolutely true? First of all, if you’re not using your ads and using the same post ID across all the ads … So let’s say you have like, one creative version of this image and copy that does really well, but you’ve run it to several different ad sets and audiences, and as campaign CBO rolls out, it will be in different campaigns … That you use the same post ID for that same ad.

Because otherwise you’re going to have like, as many ads as you create, it could be like 20 different ads, and they’ll all have different IDs, which means the comments and stuff won’t build on that ad. That’s kind of an old trick that’s always worked, but it’s super important right now, because you’ll see ads that have thousands of comments or tons of the social proof do way better both because of the algorithm and because of the credibility, so make sure you’re utilizing that page post ID kind of trick, because it’s super important.

So that comes down to what you write in it, or maybe it’s your image, or your video, or when you do Facebook Lives, you’re really encouraging people to comment on it. That will help the overall algorithm on your ads, on your organic content (which is already really low), but just your overall kind of score as a Facebook business page on Facebook to get your content seen.

So when you create ads, have that in mind. Here’s what they don’t like, though, that you will be negatively scored if you say “Comment below with blah, blah, blah.” They want comments, but you can’t literally say to someone, “Comment below,” because they will actually give you a negative score for that.

They also have, you know, definitely talked about how they’re not favoring click bait articles, click bait headlines, anything that’s like … Clicks are great for you, right? But Facebook is not looking at that as like, “Wow, a lot of people are clicking on that.” They’re looking [at], “Are people interacting with that? Are people … Do they like it? Are they sharing it? Are they getting value out of that?”

So just keep that in mind with your ads and with your content that you put out on Facebook, because if you’re just doing it to do it, or you’re just, you know, trying to put something out there to get people to click on, but you’re losing that connection, the algorithm is actually going to work against you.

So if you can get the algorithm to work with you, with your Facebook ads, you will see so much more bang for your buck, because Facebook is favoring your ad basically, over other ads. So whenever you write copy, whenever you do a video, whenever you’re creating a boomerang, whatever it is, think just a second, “Is this going to create that meaningful interaction with people in the newsfeed?” Because that’s what Facebook wants to see.

That’s working really well for our clients. We’ve really prioritized that, especially over the last six months, and we’ve seen time and time again that even we have to step back and say, “Is this content creating interaction? How could we do that better? How could we build that more connection?”

That’s something I’ve talked about forever, which is, at the end of the day, we’re just trying to connect with people, and Facebook wants that to happen. That’s why they even have their platform, and they want valuable, real content that people are going to engage with in their newsfeed, and so they are going to favor that for our advertisers.

So that is just a little statement on the Facebook algorithm changes in the last six months, and updates, and what we’re seeing on our end with them. Hopefully you can take that and apply that to your content and to the ads that you create and to the messaging that you create.

If you want to work with Team Hirsh, you can, of course, go to HelpMyStrategy.com to apply to work with our team. We have very few spots open right now, but we do have a couple, and we are definitely looking for influencers who have that product they’ve sold, have that funnel they know works, and they are ready to scale it. Thanks so much for listening today guys.

Thanks for listening to the Hirsh Marketing Underground Podcast. Go behind the scenes of multi-million dollar ad campaigns and strategies, dive deep into The Hirsh Process, and listen to our most popular episodes over at HirshMarketingUnderground.com.

If you loved this episode of the podcast, do me a favor and head over to iTunes to subscribe and leave a review so we can reach more people and change more lives with this content. That’s all for now, and I’ll catch you next time.