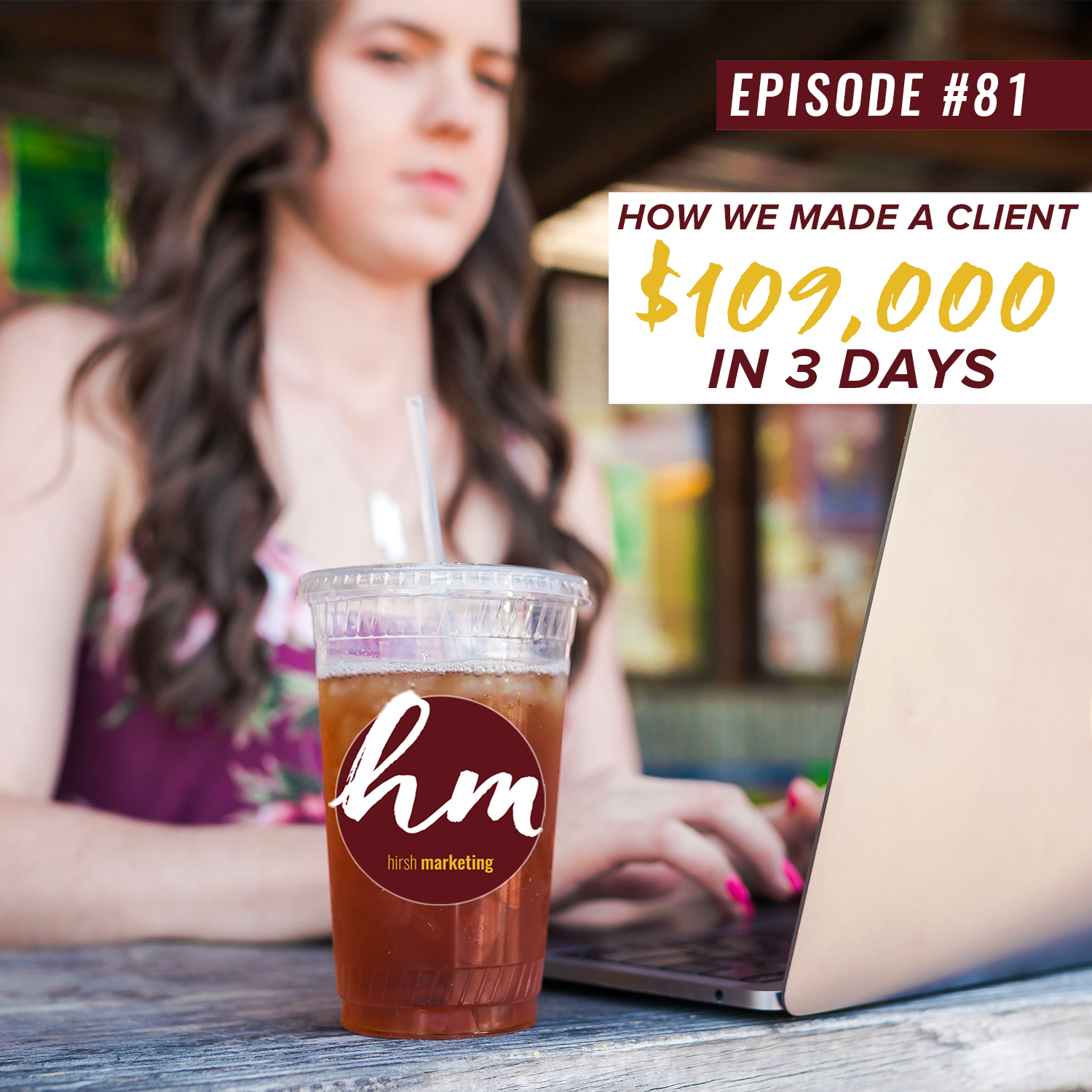 This is a Hirsh Marketing company record!

What made these ads so successful? I’m sharing our ‘lessons learned’ inside this episode. Take 10 minutes to tune in and learn more about…

This short + sweet episode is a teaser to our FREE mini-course happening soon! Go to IgniteMiniCourse.com to save your spot for our 3 video trainings, plus a live masterclass and bonus material inside our pop-up Facebook group!

Key Points
[2:14] Too many people underestimate the power of this
[4:06] How does this compare to your audience?
[7:14] Why this was a record-breaking sale!

Emily Hirsh: I’m Emily Hirsh, and this is the Hirsh Marketing Underground Podcast.

Emily Hirsh: Attention innovators, influencers, creators and game changing entrepreneurs, your internet domination begins right here. We are the powerhouse marketers that you’ve been looking for. You’re already making waves in your industry, and we’re here to help amplify those waves of change by creating a connection that cuts through the noise.

Emily Hirsh: We take everything you’ve built inside your zone of genius and find its audience. With killer strategy and laser eye for impact, we launch multimillion dollar campaigns and skyrocket your reach online, and now we are doing the unheard of. We’re unveiling everything we’ve learned, taking you behind the scenes with the Hirsh Marketing team and giving away the secrets to our client’s success.

Emily Hirsh: Stay tuned for top converting strategy, ROI reports and insider knowledge that you won’t find anywhere else. You’re changing the world, and we’re the team to help.

Emily Hirsh: Hello everybody. Today’s episode is going to be short, to the point, and really, really valuable. If you read the title, you’re probably like, “What? Is that even possible?” How we made a client 29,114% ROI in three days. It was a record for the company, a record for all client accounts ever of the ROI that we’ve ever gotten off a specific ad spend. I am excited to talk about it, because I just recently did an episode on strategically using flash sales in your marketing, and this is where retargeting is so powerful, and people way under estimate this.

Emily Hirsh: I’m going to be going in a lot more detail about retargeting and these type of strategies and tying ads to your marketing in my mini course happening right now. So if you go to igniteminicourse.com, make sure you save your seats for that because the first video is dropping soon.

Emily Hirsh: I’m kind of giving you guys a teaser today about something that we did amazing, but I definitely will teach in more detail during that mini course, and then the live masterclass happening on the 20th. Make sure you’re signed up for that, igniteminicourse.com, and let me share with you guys how we did this.

Emily Hirsh: This is why I am obsessed with retargeting ads, and way too many people don’t utilize them the way that they should. Because once you pay for leads or buyers, and you’ve already spent that ad spend to get them in your world, you can’t just forget about them. That means you need to have email followup and nurture and leverage that, and you also need to have retargeted ads every place that it would be relevant.

Emily Hirsh: The final day of our video series, I’m actually giving you our ads planner and I’m showing you how to build retargeting ads in the funnel, so make sure you come to that.

Emily Hirsh: But, here’s what we did for this, and I just actually [voxed 00:02:55] the Ads Manager who was in charge of this campaign, and shared it on our huddle a couple of weeks ago and we were like, “Wow, this is a broken record.” Because I wanted to make sure I got all the details right.

Emily Hirsh: Here’s what she basically did. It was a retargeted ad to actually past buyers to purchase a [inaudible 00:03:14] ticket, a $4,000 price point, from an influencer. I can’t give away details on the product because this is not approved by the influencer to share this, but I can definitely share numbers without names. It was for a $4,000 offer and they were very specific about who they wanted to target and they added in a special deal where the person, if they bought that $4,000 offer, would get a free ticket to their live event.

Emily Hirsh: This person, specifically, people want to see her live. She has that influence, like she doesn’t actually do a lot of live events anymore. It’s something people really want because she’s kind of become a little bit more mysterious, okay? They knew that by making the event free, it was like the one thing they really wanted, the $4,000 purchase would become a no-brainer for them.

Emily Hirsh: Now that doesn’t mean when I’m saying this, don’t go in your head like, “I got to do a free live event.” That’s what worked for this person because that’s her audience. Your audience might want a free strategy call, or a free course that solves their problems, or a template or something. Or there’s something that your audience might want that’s different than this, so don’t think like I’m telling you, “Go do a giveaway, a free live event for a $4,000 product.” That’s not what I’m saying here.

Emily Hirsh: I’m saying that our team strategized with them and said, “Out of these people who will buy this $4,000 product? What’s the number one thing they want, that they can’t have necessarily because the event is sold out, or because they haven’t even put tickets out to it yet? What do they want?” They decided they want a live event free ticket, because they want to see this person in person and get that VIP access, right?

Emily Hirsh: Number one, they were very dialed in on what this person wanted, and they worked that into the offer. Number two, they were very dialed in on who they were targeting and how they were going to talk to them. They actually targeted a group of people who had purchased a small priced product from this influencer before. They literally retargeted buyers. Hot, hot audience, right? Like our buyers are some of our best audiences to retarget for more things, and how many people miss that step and don’t do that?

Emily Hirsh: They had a very targeted specific audience with messaging, knowing, okay, these people bought this product, they’re interested in this, that solved these problems, and we’re going to give them this other amazing offer of a free ticket to this live event that’s sold out, and they get VIP access.

Emily Hirsh: They, one, knew the audience they were targeting, then had the messaging very dialed in with that audience, and they did a three day sale and made over $100,000 from just targeting that small audience. They spent less than $500 to make $100,000, that they wouldn’t have made otherwise. They might’ve been able to send out emails and make some of that, but this just came from the ads. So in addition, they probably did send out emails, this just came from the ads, and a lot of people wouldn’t see the email or open it, and so ads is a way to get that.

Emily Hirsh: I’ve talked before about our 10,000% ROI ad, which was $1,000 ad spend and $1 million revenue in a past episode, like scroll up to see that. But that one was also same thing, targeting a very hot audience that wouldn’t have bought maybe if they didn’t see that ad.

Emily Hirsh: Again in that one too, same theme, the messaging has to be really specific and clear to that audience so you push them over the edge.

Emily Hirsh: This broke a record in our company, and congratulations to the Ads Manager who I know will listen to this, and we love her. She was actually featured on the podcast recently. But this broke a record, and the reason is because we leveraged and utilized an audience they already had, we creatively and strategically thought about what that audience would want, and then we made ads. She said there was six different versions of ads, messaging wise, and then we obviously scaled what was working.

Emily Hirsh: But we didn’t have to spend a lot because it wasn’t a big audience. That’s why the ad spend was so low, because you might be thinking like, “Well, why didn’t you spend more, because then you might’ve made more money?” But the audience was limited, right? It’s not like we could do this every week with this client, but it’s still money that you’re leaving on the table if you don’t think of these type of things.

Emily Hirsh: This is why I’m obsessed with retargeting ads. This is why I think retargeting ads is easy money because you’ve already paid people, and in this case, these people had already bought. They’d already spent money with this influencer, and they’re just there and we can retarget them.

Emily Hirsh: It’s money that you’re leaving on the table if you’re not creatively and strategically thinking about not only your retargeting ads, but that backend nurturing and when are you going to sell again to these people? Don’t just forget about them once they sign up for your webinar.

Emily Hirsh: I will be going into detail, like I said, about this scenario and others, and how to plan your Facebook ads so that you have an add at every stage of your customer journey. That’s the third video in my three part mini course that’s coming out. So igniteminicourse.com, make sure you save your seat. It’s going to be amazing.

Emily Hirsh: Not only is there three videos, but there’s also tons of bonus trainings in a Facebook group. I will be personally connecting with everybody in there, and I’m just super, super pumped for it. Make sure you go save your seat, and I will see you guys there. Thanks so much.

Emily Hirsh: Thanks for listening to the Hirsh Marketing Underground Podcast. Go behind the scenes of multimillion dollar ad campaigns and strategies, dive deep into the Hirsh process and listen to our most popular episodes over at Hirschmarketingunderground.com.

Emily Hirsh: If you loved this episode of the podcast, do me a favor and head over to iTunes to subscribe and leave a review so we can reach more people and change more lives with this content. That’s all for now, and I’ll catch you next time.